An incredible amount of snow in Sestriere 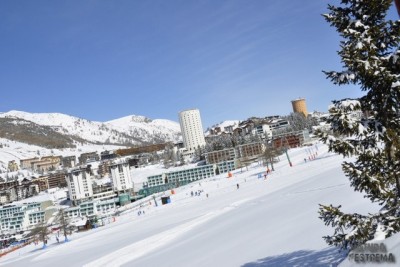 After the difficulties of the first months of the season, due to the warmest winter of the last one hundred years the best period for skiing in Vialattea will certainly be March.

After the difficulties of the first months of the season, due to the warmest winter of the last one
hundred years the best period for skiing in Vialattea will certainly be March.

It seems that the weather was waiting for journalists: a great snowfall came at the very end of February, bringing a
meter of snow. So the meeting will probably take place in a fully open resort: if temperatures don't
go up too much, the group will also find excellent conditions now on the slopes.

“Vialattea” is an international ski area, the most important of the 54 located in Piedmont, a region
with a great skiing tradition, together with Trentine and Aosta Valley. Piedmont is situated in the
north-west of Italy, bordering on France. Sestriere is almost one hundred kilometres from Turin,
and just twenty from France: the “Milky Way” links the two countries. It goes from Pragelato, in the
Chisone valley, before Sestriere, to Montgenevre, in France, passing through Sestriere, Sauze,
Sansicario-Cesana and Claviere. A total of 212 runs and 69 lift facilities, whose altitudes range
from 1380 metres in Cesana to 2800 metres on top of the Motta.


Sestriere and Sansicario have been theatre of many runs of the World Cup and other international
competitions. Besides champions, more than 15000 amateur skiers usually enjoy Vialattea: 35000
on the busiest days. The resort offers about 400 kilometres of slopes, of which 60% are covered by
artificial snow (absolutely necessary this year). The system was renewed for the Olympic Games: it
is quite efficient, but could be improved, and the management is thinking about the renovation.
Vialattea is a private company (Sestrieres S.p.a.), led by the engineer Giovanni Brasso since the
end of the Olympics and has around 350 employees (many of them are seasonal workers). There
are 800 ski and snowboard instructors in the area, and the entire economy depending on the snow
involves 6000 people.


Although most of the world discovered Turin and its mountains in 2006, alpine skiing in Sestriere
dates back to the Thirties. The municipality (the highest in the country, situated at 2035 mt)
developed around the two towers that FIAT’s founder Giovanni Agnelli built to provide a holiday
retreat for his workers. The two buildings, one yellow and one white, are the symbol of the town,
now together with a big village for the athletes which was created for the Games. A lasting memory
of those days.